Tactical voting is dead in Eastleigh and here is why 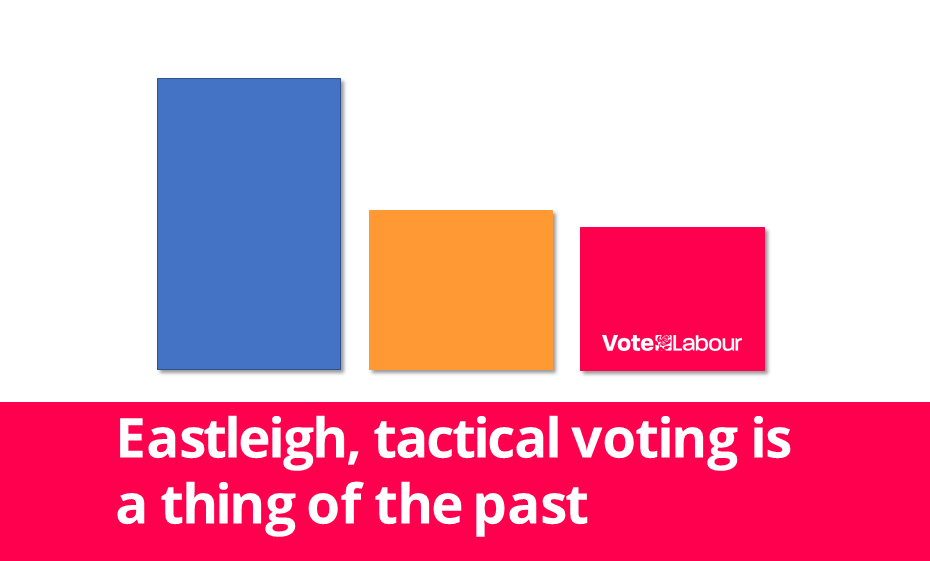 At the previous General Election, Brexit dominated the voting. This same election killed tactical voting in Eastleigh. Here is why.

⦁ At GE19, the Conservatives secured more votes than all other parties combined*

⦁ In Eastleigh, 75 people in 100 confirmed they would have voted Labour had Brexit been delivered**

⦁ Liberal Democrats are conservative – they stealth tax us, spend millions on consultants’ fees (e.g. parking charges outside your home)+

It is true that there are small locations which traditionally do not give Labour their vote. We see this in places like Hamble, West End and Netley. However, when you analyse General Election sampling, Eastleigh has a strong Labour vote*.

In Eastleigh Local Elections, Labour is the only challenger to the Liberal Democrats. We know that from our analysis below. Conservatives will not be elected in Eastleigh.

The failure of tactical voting

If we take in to account the latest, most detailed polling data produced by The Times, it highlights that if we all went to vote, the Liberal Democrats would drop off astronomically in Eastleigh after their continued national collapse.

There remains a long, hard fight for Eastleigh Labour party to beat the Tories but we know that we continue to make progress.

Our message is this:

The Liberal Democrats have sold you tactical voting, but have taken services from you and taxed you for the pleasure+

The local elections will be a chance to elect local people where you live. Please vote Labour to ensure that happens

Together, we will make Eastleigh better.